On a flight from London to Nice, I came across this article in the inflight magazine and it got me thinking… Little Wins: The Huge Power of Thinking like a Toddler.

It was a review of a book written by Paul Lindley, entrepreneur and founder of Ella’s Kitchen, the company who make those colourful food pouches for tots.

Anything that helps me get into the mind of a pre-schooler before writing is useful. I’m forty something and my children aren’t that small anymore, though we still all love picture books.

Paul Lindley’s approach also made me think a lot more determinedly about how to develop and sell my children’s books and how to get the attention of publishers. 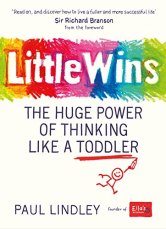 He then goes on to list nine ways toddlers think and behave that are a useful perspective for entrepreneurs, and rather helpful for writers too.

Toddlers make their minds up quickly; they are confidant about who they are and what they want to do. And they don’t worry about what people think. They aren’t distracted by second thoughts.

Wouldn’t it be to wonderful to think like that

And when you are doing something that no one has done before (such as write your book) you need confidence and self-assurance. Because there is going to be a lot of people telling you, you can’t do it than you can.

This is what toddlers do best. They are masters of grabbing attention and getting their message across. They use many strategies.

I don’t think Paul Lindley literally means jumping up and down and screaming, I can’t imagine many editors being impressed with that, but more the essence of it – being persistent, keeping your message simple, trying different methods until you and your book get noticed.

Growing up, Lindley states, kills creativity. Toddlers are life’s great experimenters, always trying new things, giving them a go. They defy convention, they don’t know it exists. And sometimes by doing things differently, they achieve what the rules could never have led them to.

The picture book Stuck, by Oliver Jeffers, sprang to mind. A kite is stuck in a tree. How will the boy get it down? Convention states get a ladder, but when that doesn’t work the boys gets rather creative.

Children’s books should break conventions and snigger at them a bit too.

Young children have a bracing, sometimes hilarious honesty… without any fear of the consequences.

As we grow we develop filters, we learn what people want us to say, we tell little white lies to keep the peace, it’s easier to stick to the quid pro quo.  The problem with this is, we stop saying, Why? and What if? – the fundamental questions of creativity.

Toddlers live in the now. They have no past and they don’t really understand the future. So, although their attention spans may be relatively short, when they are in the moment, they are really in it, they dive straight in with gusto. They have no fear of failure.

So, next time you have a light bulb moment and feel the buzz of inspiration – write it, draw it, develop it and develop it. Don’t let learned practicality and doubt pause your creativity.

Stoicism about rejection letters springs to mind here. And also, an attitude of, if this idea doesn’t work, never mind, I’ll work on it until it does, and if it still doesn’t work, then I’ll come up with a better idea and a better idea, until one day something sticks.

Having fun is a toddler’s job. They explore the world through imagination and play, and they are very clear about what does and doesn’t interest them. If it isn’t fun they won’t do it.

Roald Dahl had similar sentiments and a fantastic sense of outrageous fun.

“Matilda said, “Never do anything by halves if you want to get away with it. Be outrageous. Go the whole hog. Make sure everything you do is so completely crazy it’s unbelievable…”
― Roald Dahl, Matilda

I hear so many creative people say, it feels frivolous to spend time sketching or brainstorming plots with multi-coloured pencils and sticky notes, because it doesn’t feel like work. But Lindley says, play fosters the ability to think differently.

Sometimes desks and computers are the last places we should hang out. Switching environments (I love museums and bookshops) and colourful writing/drawing media always helps me think creatively.

Whether it is a tantrum or uncontrolled excitement, we always know how toddlers feel.

Publishers look for authors who can enthusiastically convey their passion for their story not just on paper, but in person on the publicity trail.

Toddlers are naturally open and trusting. Their ability to make new friends and learn from them puts the most accomplished professional workers to shame.

Although creativity and drafting are solo occupations, there comes a point in the writing process where you can no longer go it alone. Whether it’s professional guidance, or a crit. group,  diversity of opinion on your manuscript and writing style is essential for perspective and improvement.

And it’s rather lovely to have writing friends too. Lots of them. The more the better!

Little Wins: The Huge Power of Thinking Like a Toddler by Paul Lindley is published by Portfolio Penguin