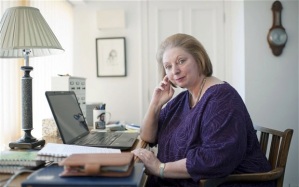 “Be specific,” is advice I have heard from more than one writing tutor over the last five years. Last April, I watched Hilary Mantel read an extract from Bring up the Bodies, the middle book from her Thomas Cromwell Trilogy, at the Oxford Literary Festival. I was struck by her exquisite use of detail and the symbolism it evoked, doubly impressive since the details of day-to-day Tudor life are nearly 500 years old. I have read many historical novels over the years. The turbulent Tudor period is a favourite era for authors and I’d felt my interest long satiated until I read Wolf Hall. There are so many lessons in Hilary Mantel’s writing, but above all I am inspired by her use of symbolism, metaphor and detail, which are woven seamlessly into character and plot. The world of Thomas Cromwell comes flying out of the past so vividly the man could be in the same room.

Here’s a summary of the discussion about the detail in the books and some of the other questions and answers posed.

Hilary reads an extract from Bring Up the Bodies, a scene where Thomas Cromwell observes the Seymour women fussing over Jane’s hood. The old French style hood has been discarded, Anne Boleyn has fallen from the King’s favour and the old Spanish style hood is to return, headed, literally, by Jane, the next queen in waiting. Mantel has paid attention to the rich details of dress to illustrate the mood. Everything has become highly charged. Fashion makes a statement about the family’s position and what is at stake. “She needed to feel the clothes on her back, feel the pain of the costume and the scaffolding of position,” says Mantel.

Did she plan a trilogy? “In my innocence, I thought one book about Thomas Cromwell was enough. It was always called Wolf Hall. As I began the segment about Thomas More’s death, I realised it was the climax of the book. Then I thought, I’d write only one more. You never get wise!”

Wolf Hall spans thirteen years and Bring Up the Bodies spans only 9 months. In the second book the plot gallops. “I wanted the reader to be rinsed with horror and transfixed in the moment Anne Boleyn is beheaded. That is the climax of the book, so I had to stop again, only then did I realise it was a trilogy.”

Mantel is asked to think about the first and last lines in each book. “Do these lines come to you in a shot?”  – “I’ve been thinking about this novel, this man for over twenty years. Thomas Cromwell. I wasn’t ready to write his story earlier. I kept expecting someone else to discover him.”  Wolf Hall starts with Cromwell in the gutter. ‘So now get up,’ his father says after beating him. Mantel focuses closely on the boot and the stitching, it is told through Cromwell’s eyes like a film unscrolling in the present tense. Wolf Hall ends, as the King and Cromwell are about to go off on a pilgrimage to the West Country. Cromwell writes the schedule and plans a visit to the Seymour’s. “September, five days, Wolf Hall, ” it ends.

At the beginning of Bring Up The Bodies, Cromwell is looking up at the falcons they have set hunting – “his children are falling from the sky,” (as the falcons swop down on their prey.) It sets the agenda, the underlying predatory theme in the book. The book ends after the fall of Anne Boleyn in the summer of 1536, when Cromwell has exacted his revenge on those that aided the fall of his mentor Wolsey. The Mirror and the Light is the final book. It starts on the scaffold and ends there with Cromwell lying on the ground in a pool of blood, just as he did at the beginning of Wolf Hall. His story has come full circle.

If we know the ending how come it still feels so tense, so gripping? “We fantasise we can step in and change history, make it more fair. The reader is drawn in as a participant not just a passive consumer,” she says.

How does she view the Trilogy now? “You must make each book in a trilogy stand up independently but also tie in together.” Links and recapitulation arenecessary she says and she uses image and metaphor cleverly to do this.

She has as unusual way of addressing Cromwell. The book is written in third person, mostly in a free indirect style, though she does zoom in and out to give focus and perspective. She tags internal or external dialogue rarely and this has generated some criticism from readers. When she does introduce Cromwell, particularly in Bring Up the Bodies she uses, ‘he Cromwell,’ where she feels there is ambiguity. “It’s always better to over estimate the reader than underestimate them and spoon feed them,” she says.  She found that, “He Cromwell,” in Bring Up the Bodies became a self-definition. As the story goes on, Cromwell becomes a bigger person in his own eyes and in others eyes too.

To get to know Thomas Cromwell, Mantel had to at first pretended she knew nothing about him. She went back to sources before the black legend was conceived. His public work is documented but his private life is off the record.  Elton most famously wrote about him as a Machiavellian mystery hissing in the wings. But Mantel thought Cromwell should take centre stage, and went about developing a plausible representation of him. George Cavendish, a dramatist, recorded Wolsey and Cromwell talking. She discovered the Lisle letters, which span eleven years of Cromwell’s time in government. She says “the business of politics is intensely personal and by necessity often off the record. Letters are very important – gold dust for the novelist. There was much to draw out of the tiny personal day-to-day incidents in the letters. Cromwell’s contemporaries say he is eloquent and engaged. I thought of him as the plum in the Christmas pie that needs to be dug out.” She’s enjoyed changing the public perception of him.

Wolf Hall and Bring Up The Bodies are being adapted by The Royal Shakespeare Company into two productions, to be staged later in 2013. The two, two hour plays have a restricted cast, which is a challenge given the enormous cast list at the front of Mantel’s books.

There is also a TV adaptation in the works. The BBC and HBO script is being written by Peter Staughan. Mantel has worked closely with Staughan, Thomas More has been a particularly difficult character to adapt as Mantel has written him a master of ambiguity and silence. “More doesn’t say much so we are going to tell it from character, how the actors use their bodies will be critical.“

“There has to be compromises between history and drama,” she says, “but history should never be distorted for the sake of drama.’ She views the plays and TV Mini series as new works.

Bring up the Bodies is Hilary Mantel’s 13th book. She has also written short stories, radio drama and thousands of words of literary journalism.

The Mirror and the Light is expected to be released in 2014, “if I’m allowed to get on with it, “Mantel says wryly.

Writing for Kids (While Raising Them)

A Certain Point of View